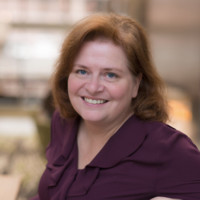 In that role, she leads the marketing and communications program for the Sisters of St. Mary of Oregon (SSMO), Valley Catholic School (pre-kindergarten through grade 12), Maryville (offering skilled long-term care, short-term physical rehabilitation, memory care and an Alzheimer’s unit) and the SSMO Foundation.

An active member of the Public Relations Society of America (PRSA), Kean earned the Accredited in Public Relations (APR) designation in 2011. According to PRSA, “APR is a mark of distinction for public relations professionals who demonstrate their commitment to the profession and to its ethical practice, and who are selected based on broad knowledge, strategic perspective, and sound professional judgment.”

She is the 2016 recipient of the PRSA Oregon chapter’s Ron Schmidt Community Involvement Award. An award of distinction which “honors the outstanding use of public relations to support community improvement and important causes.”

Kean earned a certificate in Digital Marketing Strategies from Portland State University’s Center for Executive and Professional Education (CEPE) in May 2016.

Prior to joining Sisters of St. Mary of Oregon Ministries Corporation, Kean served at Communications Director at Union Gospel Mission of Portland, Oregon and has previously served as Public Relations Manager for the Better Business Bureau serving Oregon and Western Washington.

Kean is a native Oregonian and a graduate of University of Oregon.

In July 2018, Kean joined the award winning Communications and Marketing team at the Sisters of St. Mary of Oregon Ministries Corporation.

In 2016, the Communications and Marketing team was honored by the Hermes Creative Awards, which showcase “the messengers and creators of traditional and emerging media.” Team members received one platinum award, two gold awards and an honorable mention for their work in publications, graphic design and video. For their work on Spirit, the SSMO campus magazine, they received a platinum award in the 2016 MarCom Awards, an international competition for marketing and communication professionals.

In 2017, the Communications and Marketing team was again honored by the Hermes Creative Awards, receiving two platinum awards, three gold awards and two honorable mentions for their work in publications, graphic design, writing and video. They also received a gold award in the 2017 MarCom awards for their work on two issues of Spirit magazine: the history issue about the Sisters of St. Mary of Oregon (SSMO) and the issue capturing a day in the life of the SSMO campus.

In 2018, the Communications and Marketing team received an Award of Distinction for the video “The Memory Project,” from Videographer Awards.